Over the years I have grown to be a great fan of this guy. I have been following Rob Riches for more than 6 years now and I really love his workouts. So, when his failed drug test became news, I was naturally disappointed but then I finally decided to dig a bit deeper into the controversy and tried to find out whether he was actually on steroids or not. 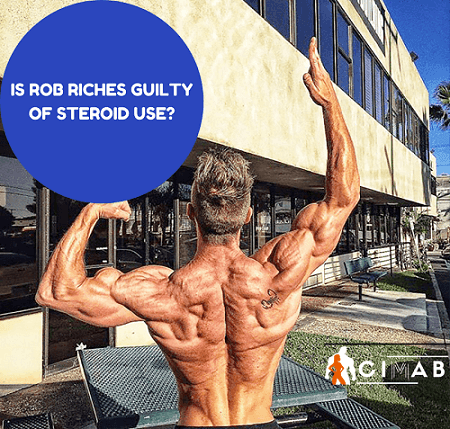 Before we get into that, I think Rob Riches needs a bit of an introduction here.

Who is Rob Riches?

Rob Riches is a British fitness model and bodybuilder who has a great following on social media. His workout videos as well as recipes are immensely popular. He is largely viewed as a natural or a so-called natty since he claims to be a lifetime natural.

As a matter of fact, he has been the top inspiring model or bodybuilders for most guys trying to build a good body while being all-natural without the use of steroids, pro-hormones, or even SARMS.

Rob is extremely muscular. He tips the scales at 182 lbs or 82 kgs and is 5 ft 10 inches tall. Even though this is not something that is highly impressive for guys trying to bulk up, what makes him stand out is that his body fat is ridiculously low at 5% and he stays that way throughout the year. This is what makes a great inspiration for most.

He is extremely dedicated and is so disciplined that he should get an award for having a slice or fruit and but bread with jam on top as a cheat meal!

I mean, who on earth, has that for a cheat meal?

But again, this Rob Riches, dedicated as ever to get results that are beyond imagination.

His reputation was tarnished in 2013 when he failed the dope test. No longer did he fail the test that he was nicknamed Roid Riches. Social media can be really brutal at times and its highly unfortunate that people call you things without getting to the root of the issue at hand.

On of the forums, a user wrote:

“Aha! I knew he was on something. It was blatantly Anavar. 100% Growth Hormone.”

Such comments can be more than enough to break anyone’s confidence. But here, we have a guy with a strong grit who cannot be taken down with such mean and low comments when he knows his stuff and has done nothing wrong or illegal.

Soon enough, Rob posted an article on his official website with details of the failed dope test. He also put up the letter that he got from UKBFF stating that it was N,alpha-diethyl-benzeneethanamine in his body that made him fail the test.

Now, for those who do not know what this substance is, let me tell you that it is a stimulant that is included in energy boosters. Moreover, this is kind of stimulant has no effect whatsoever on your body composition. Thus, it is apt to say that it is pointless in having it before you compete onstage.

Furthermore, Rob claimed that it was his pre-workout supplement Craze that was to be blamed for this failed dope test and that it contained N,alpha-diethyl-benzeneethanamine in it. He also clarified that Craze did not list it in the ingredients which was the number one reason for him having it.

Is Craze Really to be blamed?

Luckily, not much investigation is needed to confirm the truth in this case. Craze is a supplement from a company headed by Matt Cahill. Now, this is a guy with a bad reputation within the supplement industry. As a matter of fact, this guy is known to have been facing criminal charges for including dangerous hidden ingredients that he distributed through his company.

Later on, it was established by a US anti-doping agency that Craze actually included amphetamines without disclosing them on the label and the so-called natural supplement was not so-natural after all!

A little bit of deeper digging revealed that Cahill was known to have sold an illegal designer steroid to a baseball player that damaged his liver and ruined his career.

But that’s not all!

He is also known to have added dangerous chemicals in certain weight loss pills that he marketed. What is even worse is that these chemicals were known to be unfit for human-use since decades because of their side effects that included blindness!

It seems like Rob was lucky enough not have landed in the hospital.

Those who have been following Rob know that he a hard worker and that he gets some amazing results from his workouts. Even though there are a lot of guys following his routines, most are not able to get the results that he is getting. One of the contributing factors is supposed to be his great genetics.

Over the years, what I have noticed is that even though he has gained a lot of muscle, he has not really gained a lot of mass. In other words, he does not look bulky as most bodybuilders do. On the other hand, he looks just great for a fitness model.

However, most guys will only have small gains when starting out.

One of the things that strikes you immediately when you chart out his growth process over the years is that his body fat has remained extremely low over the years and it simply does not seem possible as you get older and unless and until you are someone using drugs.

It is extremely difficult to maintain a very low percentage of body fat as you grow older and there are two main reasons behind that:

Having said that, someone with Rob’s knowledge will know how to keep his metabolism as well as testosterone levels up. At the time, this whole controversy occurred he was just 32. Thus, his testosterone would not have seen a significant dip.

At the normal rate, his testosterone would have dipped by 2% but I am sure he can make his way around with certain foods, supplements, and other lifestyle changes to put things right on track again.

When someone uses steroids, some of the side effects get apparent and you can make out if a bodybuilder is juicing or not.

Some of the most common side effects could include the following:

So, this one goes in his favor!

The above test seems to be the only one that Rob seems to have failed and that also because of Craze. He has been tested for drugs a couple of times and has always cleared them of having used steroids, SARMs, or any other banned substance.

Some of the events that he has cleared include the following:

It’s worth noting that some of the federations mentioned above try to expose those that test positive for drugs. Not just this, they also have pages dedicated to listing the name of such competitors.

All the evidence above goes in favor of Rob. It does not look like that he took steroids for gaining muscle or to cut down fat and that he seems to be truthful when saying that Craze is the supplement to be blamed.

There’s no evidence that Rob is “Roid Riches”. With lack of any evidence, it must be presumed that he is innocent and that he is a perfect natural.

Those who are unhappy with this, should hit the gym and try to train fro 15 years every other day so that they could get results like him!