Do you want to know if Simeon Panda is Natty or not? 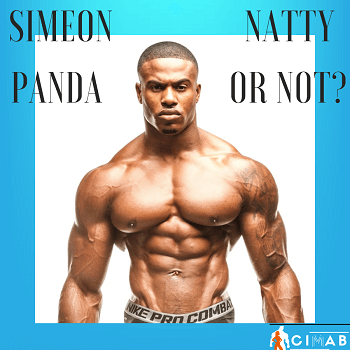 An English bodybuilder from London, Simeon is the proud owner of an amazingly aesthetic physique. One of the most appealing things about this bodybuilder is that he has a tiny waist coupled with a heavy and hugely built upper body, which truly reminds of the bodybuilders of the golden age when Arnold ruled the scene.

Simeon is one guy who claims to be a lifetime natural. His tiny little waist does, however, indicate that he might be speaking the truth.

If you have noticed a lot of bodybuilders competing for titles these days have huge bellies like those of pregnant women. Sadly, this shows that they have been using illegal stuff with HGH being one of them.

Simeon has been claiming to be natural for quite some time and this seems to have made him excessively popular on social media with his Facebook page having more than 4.7 million fans. Interestingly, this number is much higher as compared to those of Phil Heath and Kai Greene.

But this is just one side of the picture.

A larger number of people have actually abused him and have called him a liar saying that it is not possible to have such a body without ever using steroids and this guy seems to be a massive pack of lies. As a matter of fact, a lot of bodybuilders these days are facing such accusations. One of such guys is Sadik Kadzovik who also claims to be a natural.

But I guess, when you get popular, you have to get used to trolling too!

Before I get into whether Simeon is natty or not, let’s have a look at some of his stats:

A cursory glance at these measurements and you are likely to assume that this guy is all steroids.

How the hell is it possible to have a chest measuring 51 inches and a waist as small as 31 inches with a body fat percentage of a mere 7%?

Comparing Simeon with Arnold and Suggesting He’s on Steroids

One of the guys that think Simeon is on roids is Jason Blaha. Nattyornot.com also echoes the same sentiment that he has been using steroids for both gaining muscle and shredding fat.

Both Jason and the website seem to say that both Arnold and Simeon are the same weight and like Arnie who has admitted to using steroids in the past, Simeon too must have used them.

But, this is all an assumption.

First of all, it is extremely naive to think of Arnold and Simeon being of the same weight and size. In all possibility, they must have read it somewhere and would have started believing it.

In reality, Simeon is nowhere close to the Austrian Oak when he won the Mr. Olympia Title. 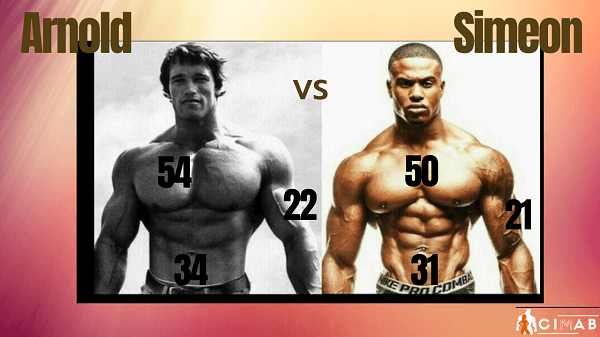 At the time of winning the title, Arnold tipped the scales at 270 lbs, making Simeon fall 40 pounds short of bodyweight.

Not just this, Arnold’s chest measured 58 inches, which is way too big as compared to Simeon who falls short by a staggering 8 inches. Furthermore, Arnie’s biceps were 22 inches. Even though Simeon is just an inch behind, I would like to remind you that gaining just an inch of muscle on the bicep is not an easy thing. It takes a lot of effort, time, and sweating in the gym to gain even an inch.

Moreover, being big or small in comparison to Arnold does not automatically mean that he has been taking steroids.

Also, it wouldn’t even matter if Simeon was as big, or even bigger than Arnold….It doesn’t automatically mean he’s taking steroids.

Musclemania: Is There Any Credibility in its Testing?

Musclemania is one of the competitions in which Simeon is known to take part. As discussed in Chul Soon’s video, it is actually quite easy to beat the dope test for this competition and this is because they test competitors right after the event.

What it means is that the competitors can actually plan how to beat this test by coming off steroids accordingly. Since they know the date of the competition, they get an upper hand in beating the test and come clean even if they have been juicing.

Thus, even though Simeon has been passing the Musclemania drug test, it is not suggestive that he has never used steroids.

When it comes to natural bodybuilders, they have a very distinct pattern that shows their muscle gains over a period of time. More often than not, they take a long time to bulk up.

Typically speaking, such bodybuilders begin gaining muscle slowly and then they plateau after some time. The growth after this phase is painstakingly slow.

Steroids users, on the other hand, show a different pattern,

Such bodybuilders usually begin lifting weights and once they hit plateau they begin taking steroids resulting in massive muscle gains.

If you go to SimeonPanda.com you can easily track his progress in before and after photos, which suggests that he has taken a lot of time to bulk up with the muscle mass that he has today. He started working out more than 20 years back as a teenager and has made slow and steady progress over these years. This indicates that he has been a natural throughout.

Tiny Waist – Suggestive of Being Natty!

You have to give the man credit for this. I am yet to see a man so big with such a tiny little waist. I mean, even Arnie had a waistline measuring 34 inches and this guy sports a 31-inch waistline with a massive upper body by any standards.

Most bodybuilders nowadays sport big bellies which clearly shows that either they have been using HGH or Insulin or steroids. Such drugs are likely to give you a thick and blocky midsection in all likelihood.

But, Simeon steered clear of the drug route. At least, this is what his slim waist is suggestive of.

When he was getting a lot of hate and people were calling him a fake natural, he decided to go for a lie detector test.

Some of the questions being asked during this test included the following:

As obvious, he answered in the negative to both of these questions and there was no sign of any deception during the test. In simple words, he just passed the test.

In other words, tests done by this guy are supposed to be highly credible.

In the light of the above facts, it seems quite possible that Simeon Panda is a natural bodybuilder who has trained hard for years and years to get the body that he has today. It is clear that he has used natural supplements but there’s nothing to suggest that he has done down the roid path.

There are no signs that he has used steroids. No acne, no bloating, no steroid gut and no changes in his facial structure are a sign that he has tried to stay clear of steroids.

Moreover, he has passed the polygraph test with 98% accuracy.

I am quite confident that he is a natural bodybuilder especially since there is not even an iota of evidence to suggest otherwise.