Do you want to know the answer to the question – Did Lou Ferrigno use steroids to win in bodybuilding?

If so, just read on… 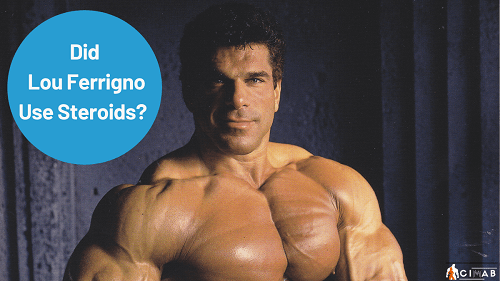 When we talk about ‘The Incredible Hulk,’ what is the first thing that strikes your head? Yes, we are talking about the great actor Lou Ferrigno and an even more exceptional bodybuilder.

Lou Ferrigno has witnessed all highs and lows in life and has come out triumphant from each of his battles. However, to build his out-of-the-world physique and a massive body frame, did Lou Ferrigno use steroids to win bodybuilding?

Let us delve deeper to understand his take on steroids, his showbiz life, and a sneak peek into his personal life.

Lou Ferrigno shot to fame after his much talked about Mr. Olympia championship episode with Arnold Schwarzenegger. Though he lost the title to Arnold, his commitment and finesse got recognized by the world through the documentary film ‘Pumping Iron.’

However, it wasn’t all bed of roses during Ferrigno’s childhood. From contracting a serious ear infection to almost losing his hearing abilities, Ferrigno has been through grave phases in life.

His disability pushed him to work double hard to perfect his skills in bodybuilding. With just iron in the basement of his house, Lou toiled day and night for an impressive body built.

His hardships and struggles paid off when he won the Mr. America title at the age of 18. Following this, he got hold of numerous acclaimed honors that were a milestone in his life.

After the famous stint with Arnold, Lou was ready to take over the bodybuilding competition again. But this was when he started getting offers from showbiz, and he landed a role in ‘The Incredible Hulk’ TV series as the great Hulk himself!

Also Read: Is Chul Soon Natural or On Steroids?

With the famous documentary ‘Pumping Iron,’ Lou was now a renowned name among people. After the great success of his character as Hulk, he got the possibility to work on its sequels.

Hulk as a character got associated with his movie career for a long time, and he contributed to the different versions of the movie.

His other noteworthy character was Hercules in 1983, and by now, he had created a distinct fan base for himself in Hollywood. His successes and achievements in movies and TV series were skyrocketing though his love for bodybuilding never died.

Lou also worked as a personal trainer for the legend Michael Jackson. He worked as his fitness trainer and several other Hollywood celebrities and helped them get into shape.

Lou Ferrigno’s Opinion About Steroid Use

In an interview in 1988, Lou openly stated that he used steroids to prepare himself for competitions. Even though that news does not create much of an impact in current times, this was not perceived well in those days.

The issues with steroid use were mainly due to a lack of information and the risks it possessed.

Despite having used steroids himself, Lou had quite a surprising opinion about the same. On numerous occasions, he admitted to not supporting the use of steroids for bodybuilding. He further went on to say that steroids should be banned from being used.

Lou Ferrigno claimed that steroids were one of the reasons that led to his retirement. He stands by the fact that steroids have several risks and health complications which he did not favor.

Since many children looked up to bodybuilders for inspiration and even desired to follow the path, steroid use was not a good influence. Furthermore, Lou felt that despite bodybuilding being a safe sport, the use of steroids undermined its safety to a great extent.

His opinion was recorded in the 1988 interview where he admitted to having experimented with steroids. It was speculated that even though Lou Ferrigno did use steroids to win in bodybuilding, he did not support using these drugs for gaining muscle or cutting down body fat.

Though Lou has denied using steroids to build his extraordinary physique, we took the liberty to create a steroid cycle* that he may have followed:

*The above information on the steroid cycle is purely based on our assumptions. There is no material available to validate this.

Legal steroids have become quite a rage these days, and the primary reason behind that is that they ensure great results and are also free of side effects. Another positive that goes in their favor is that you do not require a PCT once you are done with a cycle.

Let’s have a look at some of the alternatives (legal steroids) for Dianabol, and Deca Durabolin.

Brutal Force is a brand that has become synonymous with high-quality supplements that mimic steroids without any of their side effects. This brand has been around for many years now and has sold over half a million bottles to date.

DBulk mimics Dianabol and DekaBulk helps you get results similar to Deca Durabolin. Why Do Bodybuilders Use Steroids?

It’s an open fact that bodybuilders use steroids to enhance their muscle mass and physical features. Since bodybuilding is completely dependent on how your body looks, people find using steroids easier to ready themselves.

Using steroids in sports is not legal, but many bodybuilders still do it. There have been much safer options for anabolic steroids in current times, giving you the same result with lesser side effects. However, steroids do have certain health implications, which make them not a good option for people.

Steroid intake may be very common in bodybuilding, but even actors do not shy away from using them. Many of them take steroids to change their physical attributes for different roles. This is especially done by actors who might need to gain muscle mass within a very short period of time.

Steroids help them to get the desired result within less time.

Y0u can find out if Micheal Clarke Duncan, Christian Bale take steroids for roles in films.

Lou Ferrigno is a well-known name in the bodybuilding industry. The Incredible Hulk seems to have admitted to using steroids but he never supported it. It remains the stark truth that a lot of bodybuilders have used steroids (both of yesteryears and the current times). One of the current age bodybuilders who is suspected of having steroids is Chul Soon.

That said, if he did stop using steroids when he was playing the Hulk, the physique he attained was quite impressive. Even though steroids give a ripped physique, there is no denying the side effects that people suffer from it.