What makes people wonder about this is because Christian Bale does not have an extraordinary built. He is somewhat of an average guy with a small or fragile body frame. 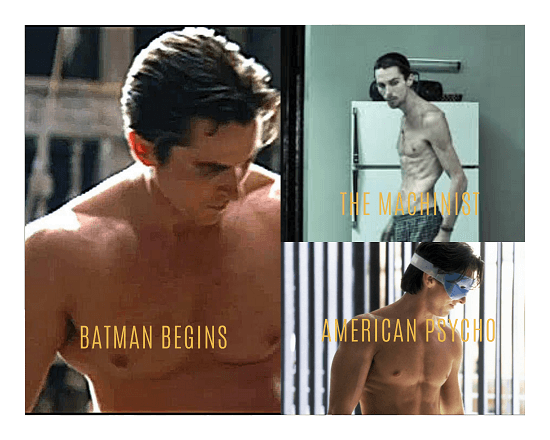 As a matter of fact, Chris is somewhat lanky and does not look intimidating at all. You can well imagine how he would look dressed as a bat and it’s anyone’s guess how much fear he would induce into drug dealers, rapists, and other criminals.

In order to understand things better, I think you need to go back a little further than the Batman series. Let’s begin with The Machinist…

Now, if you compare Christian of The Machinist with what he is in the Batman Begins, you would naturally be intrigued with the amount of muscle the Christian seems to have put on in such a short period of time. You must note that there isn’t much of a time difference between both these movies.

Anyone comparing him in these two movies is going to be surprised with his incredible body transformation.

What is highly interesting is that Bale went on from looking gaunt or rather anorexic to a full-ledged bodybuilder in a period of just 5 months. Gaining weight and muscle at this speed is what actually raises suspicion. This is quite like Tom Hardy who seems to have bulked up with muscle in his successive on-screen appearance, sometimes within a few months in between.

In between these two movies, Bale is known to have gained just about 30 kgs, most of which happens to be in the form of muscle.

It is but natural for people to jump to various conclusions with regards to the possibility of him having used steroids to bulk up.

So, did Christian took roids for his role as Bruce Wayne?

As mentioned above, we need to address the question – Is it possible to gain 20-30 kgs of muscle is a span of just 5 months, and if yes, how?

Well, to be honest, I don’t think gaining such kind of muscle weight is possible in such a short period of time. I have been training for many years now and I can say with full confidence that gaining so much muscle takes a lot of time as well as effort if you do it naturally.

But wait, this is not the whole story…

Before Bale actually shot for The Machinist, he was in good form. In other words, he was trying to regain weight rather than bulk up with a fresh start.

Now, this kind of changes the complete scenario.

And, your query now turns to – Is it possible to regain 20-30 gs of muscle naturally within a short span of 5 months?

This, I would say is not impossible for someone who has good muscle memory.

He Already Had the Mass…

There’s no doubt in the fact that Christian Bale was not always skinny as he is shown in The Machinist. As a matter of fact, if you view him in American Psycho, you would agree with me that he was in very good shape – lean and muscular!

Here, we are likely to assume that good muscle memory is likely to be one of the main reasons behind Bale’s exceptional muscle gain story.

But is Muscle Memory Really That Powerful?

Let’s have a look at muscle memory nitty-gritty…

It’s important to understand that there are basically two kinds of muscle memory:

It must be noted that when you gain weight by consuming more calories, most of this weight is going to be muscle weight. I can say this from my own personal experience. I lost a lot of muscle by engaging in HIIT but I regained it by consuming a diet rich in calories later in.

And the main reason behind this was good muscle memory.

Let’s get on to the next question then – Could Christian Bale still have used steroids to gain muscle for the fil American Pyscho?

Here’s more to this situation…

First and foremost, Patrick Bateman is muscular but there’s nothing to suggest him as being extraordinarily huge.

Even though he looks lean and ripped, nothing indicates the use of roids for getting huge muscles.

In other words, this kind of physique is perfectly attainable for someone who is natural.

More importantly, there do not seem to be any visual side effects that are commonly associated with steroid use and these could have included:

Just like Christian Bale, there seem to be a lot of people wondering whether Dwayne Johnson, The Rock is on steroids or not. Click here to find out.

Why it’s likely Christian Bale was natural for American Psycho…

One of the factors that you need to take into account is how determined a person is to train and workout. If somebody is not driven enough, it is almost impossible to get a body like Christian Bale has in American Psycho naturally.

Thus, it is an individual’s personal attitude that may affect his choice of staying natural or going for steroids.

For example, someone like Rob Riches who has immense knowledge of bodybuilding and training is likely to be presumed a more natural bodybuilder as compared to someone else who isn’t really fond of training but sports good muscle size.

The rule of thumb is that if someone has a good body and is a dedicated trainer, then is it quite possible that he is a natural bodybuilder.

Now, I am talking of someone who has a good physique here and someone who is into professional bodybuilding like those competing in Mr. Olympia!

Secondly, if there’s someone who trains only on weekends and sports good muscles, then it is quite possible that he is juicing.

I would not hesitate to say that Christian Bale is someone who falls within the parameter of the first category. Moreover, it is highly likely that he has access to the best trainers in the world who can help him train for getting quick results. Even nutrition is something that he can easily take care of.

I don’t see anything wrong in assuming that Christian Bale is a natural with good muscle memory that has helped him bulk up after The Machinist.

It’s clear from his journey from American Psycho to Batman Begins that he hasn’t bulked up with an extraordinary volume of muscle which could have indicated steroid use.